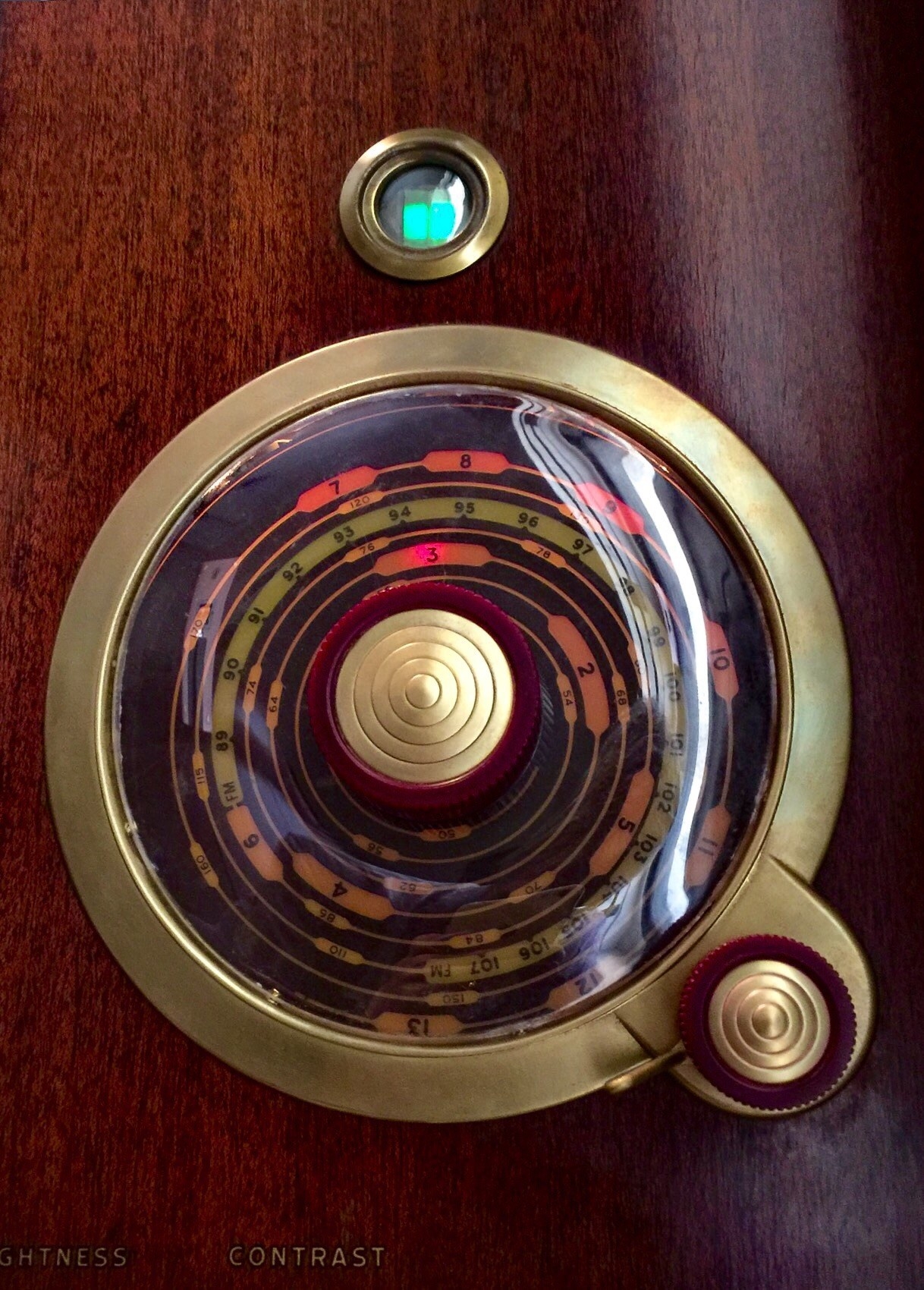 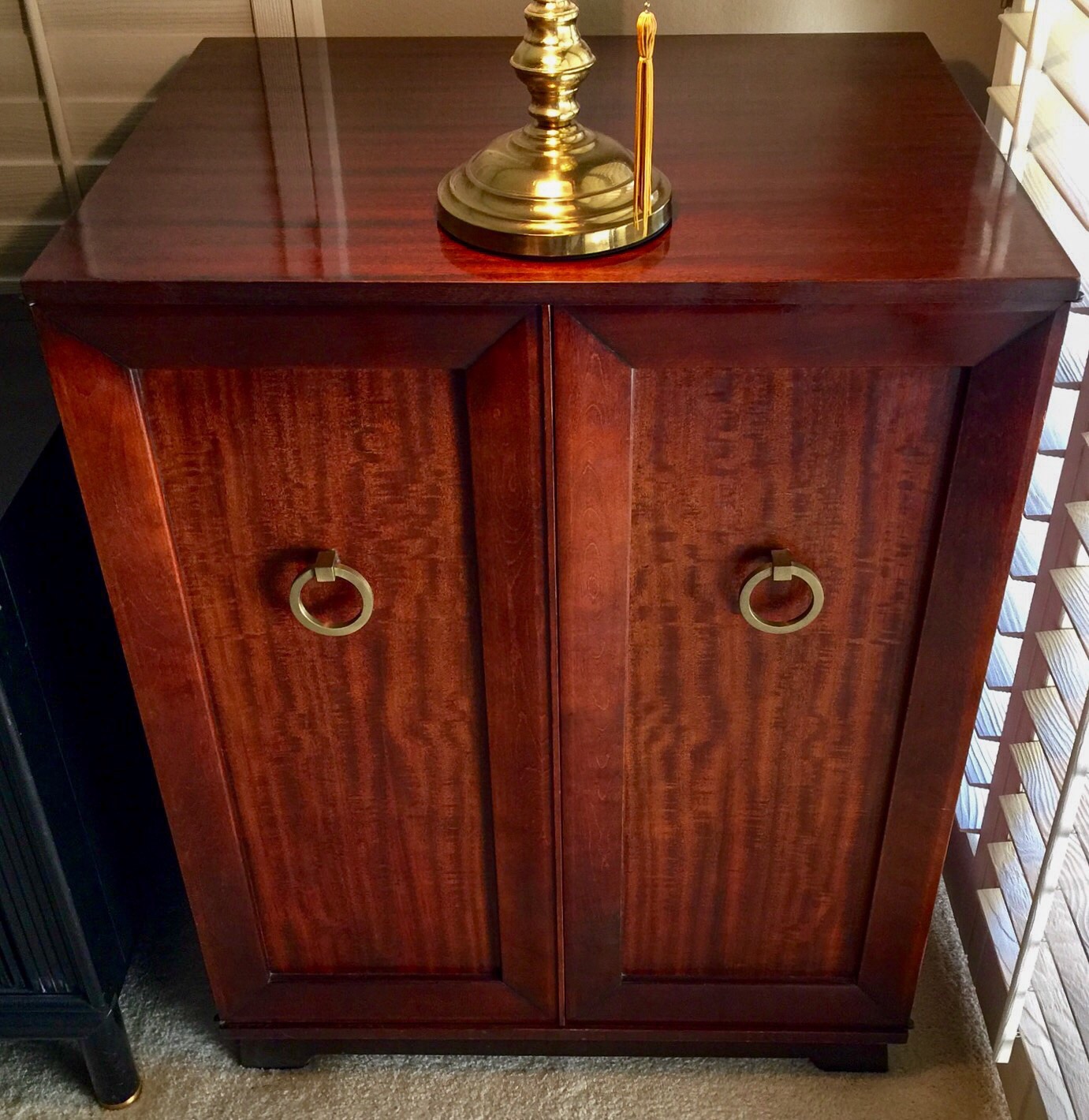 Allen B. Du Mont Laboratories, Inc. has the distinction of being the first to introduce an all electronic television receiver to the American public in 1938. They were known to be high end, high quality televisions. This Du Mont is my first and we can see it was “overbuilt” and that is a good thing. From the thick stile doors, the continuous tuner incorporating both VHF, UHF, and FM, frequencies, the heavy duty power supply and quality components throughout.

This 68 year old television has a contemporary appearance and has been restored by the previous owner. I’m proud to be the custodian and the photos below don’t show you the beautiful piano lacquer, deep high gloss finish. As a four year old boy, we were fascinated  with my parents “magic eye” tuning indicator on their radio. Now we have one incorporated into this television. That, together with the unique backlit tuning dial makes this television stand out to me. It’s all about the nostalgia of an earlier time and memories.

The three screenshots below were captured from a DVD player and the movie is the 1948 “The Red Shoes”. 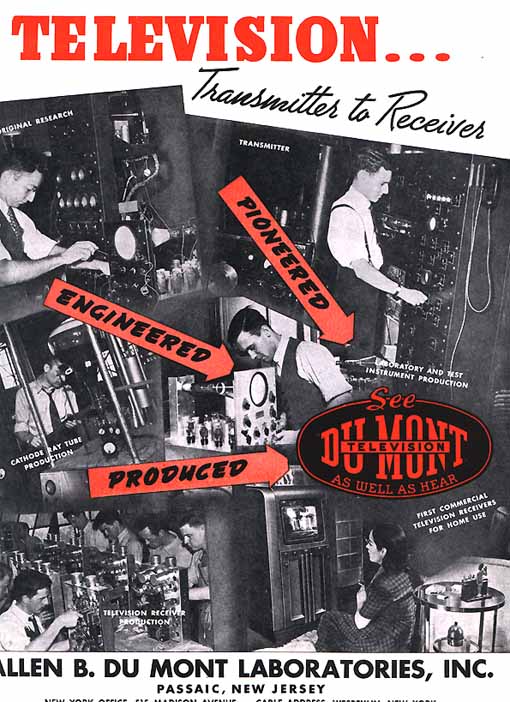 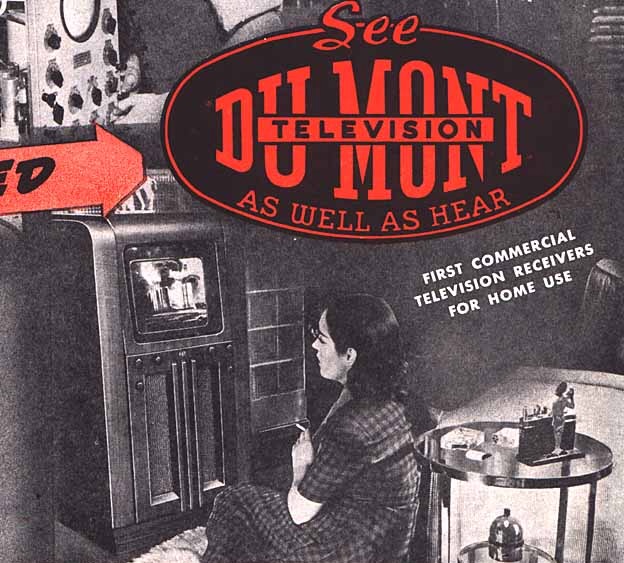 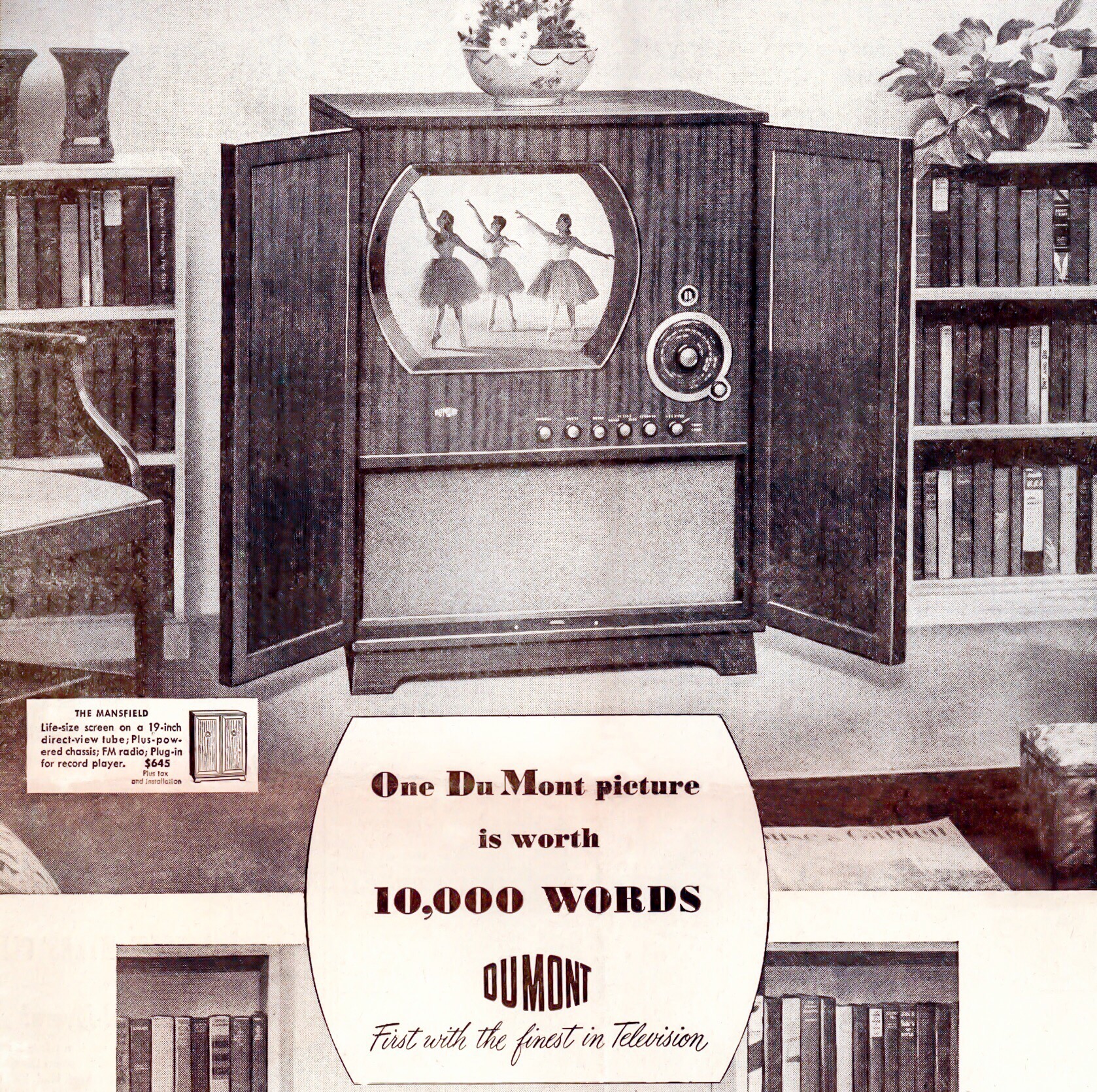 The Du Mont arrived today safe and sound, umblemished and in good working condition thanks to the excellent packaging and crating, shipped from Ohio.

Tap on any image for an enlargement.

Tap any image for an enlargement.

This set was acquired from the Early Television Foundation Convention auction held on May 6, 2017. I’d like to know more about the set from the previous owner. As you can see the set is in fantastic condition and provides very nice detailed images. More to come. 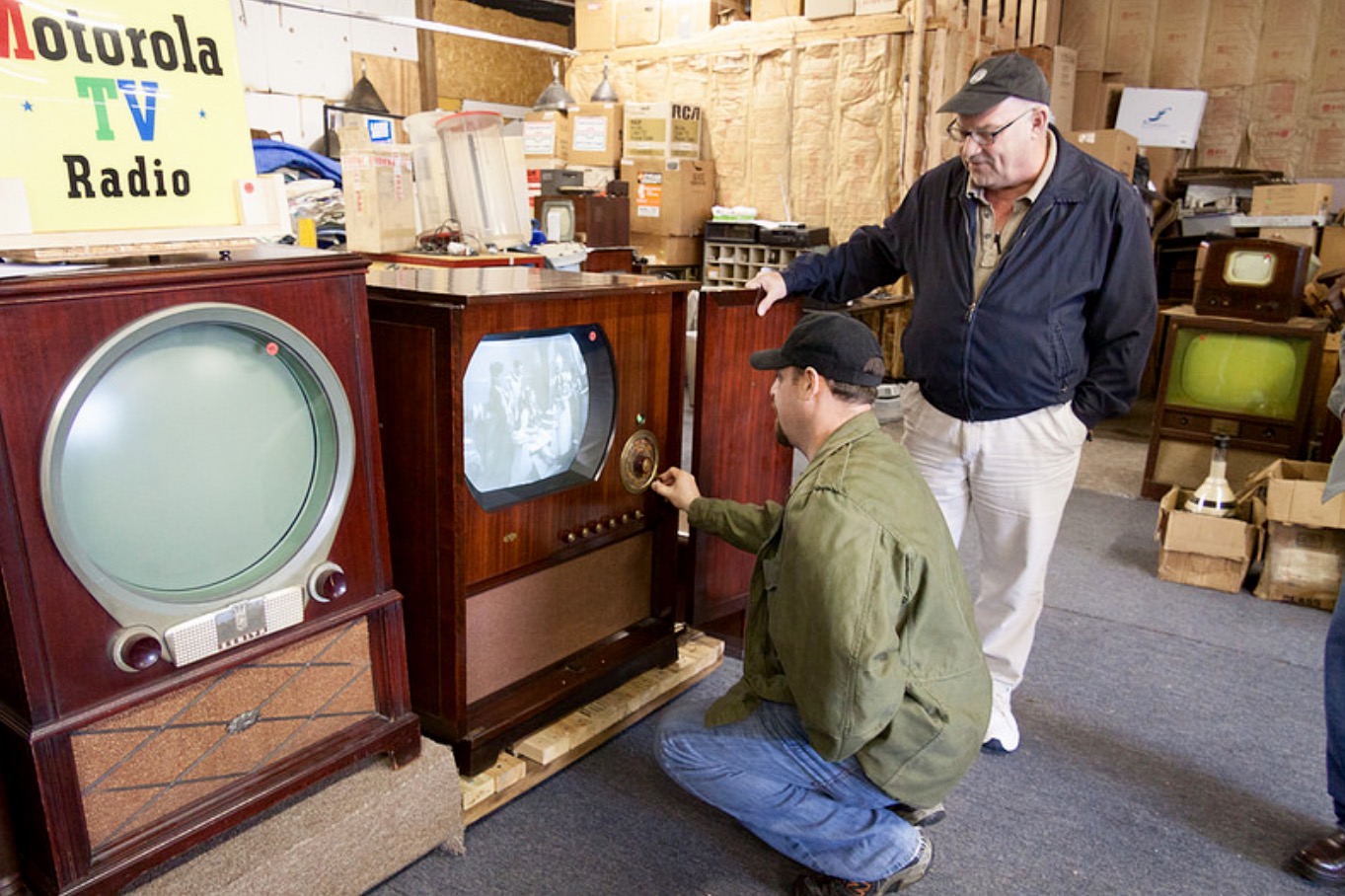 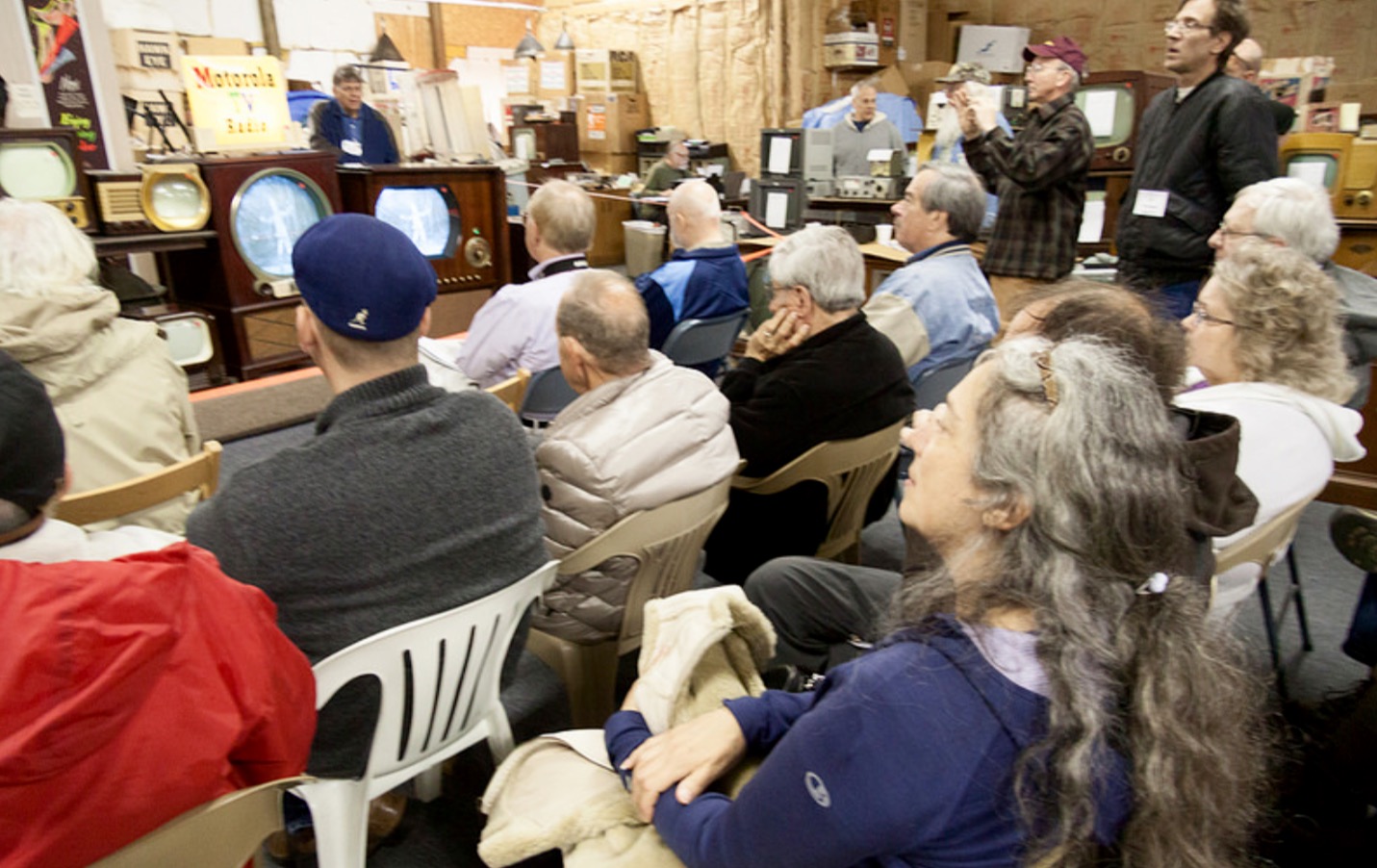 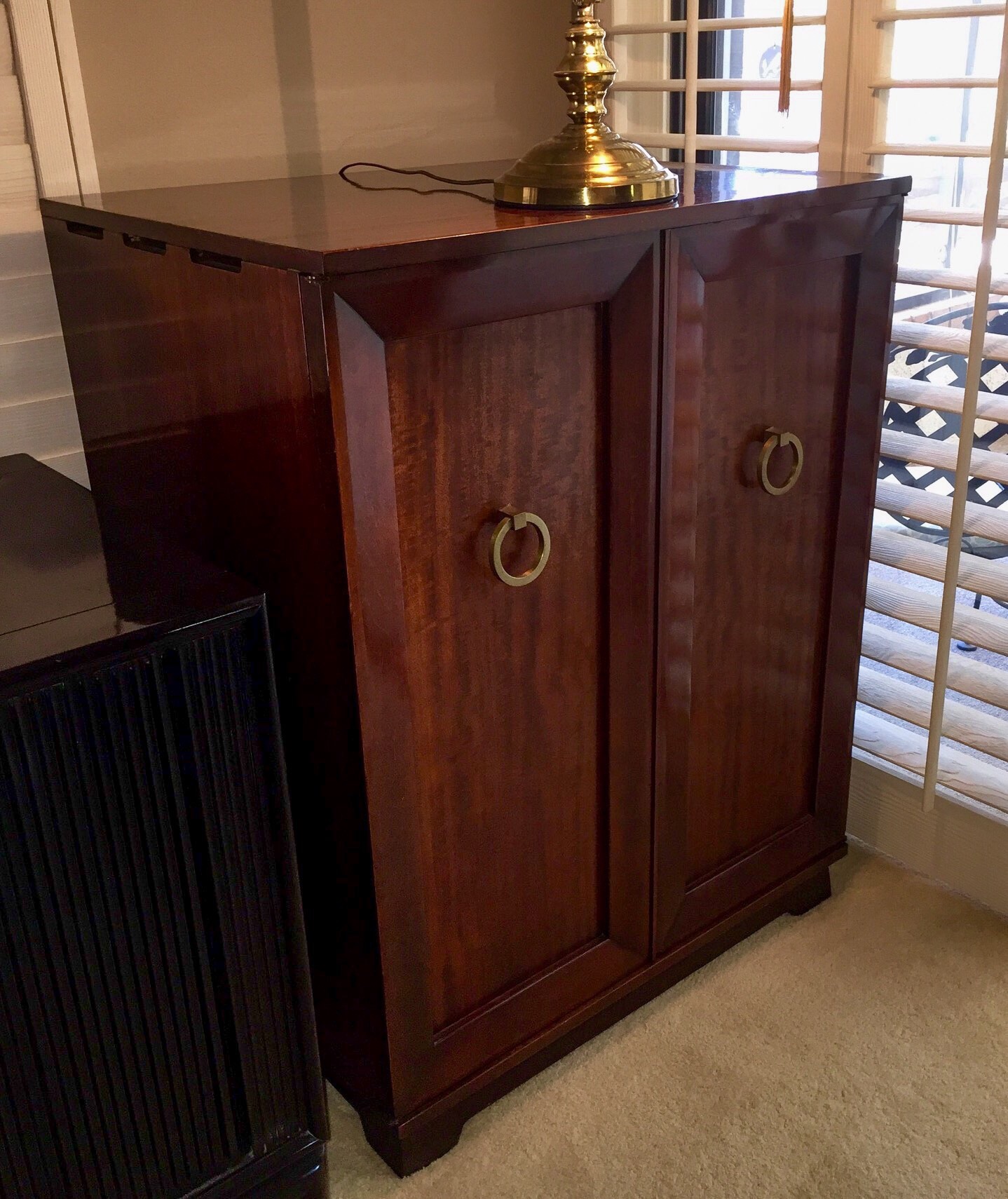 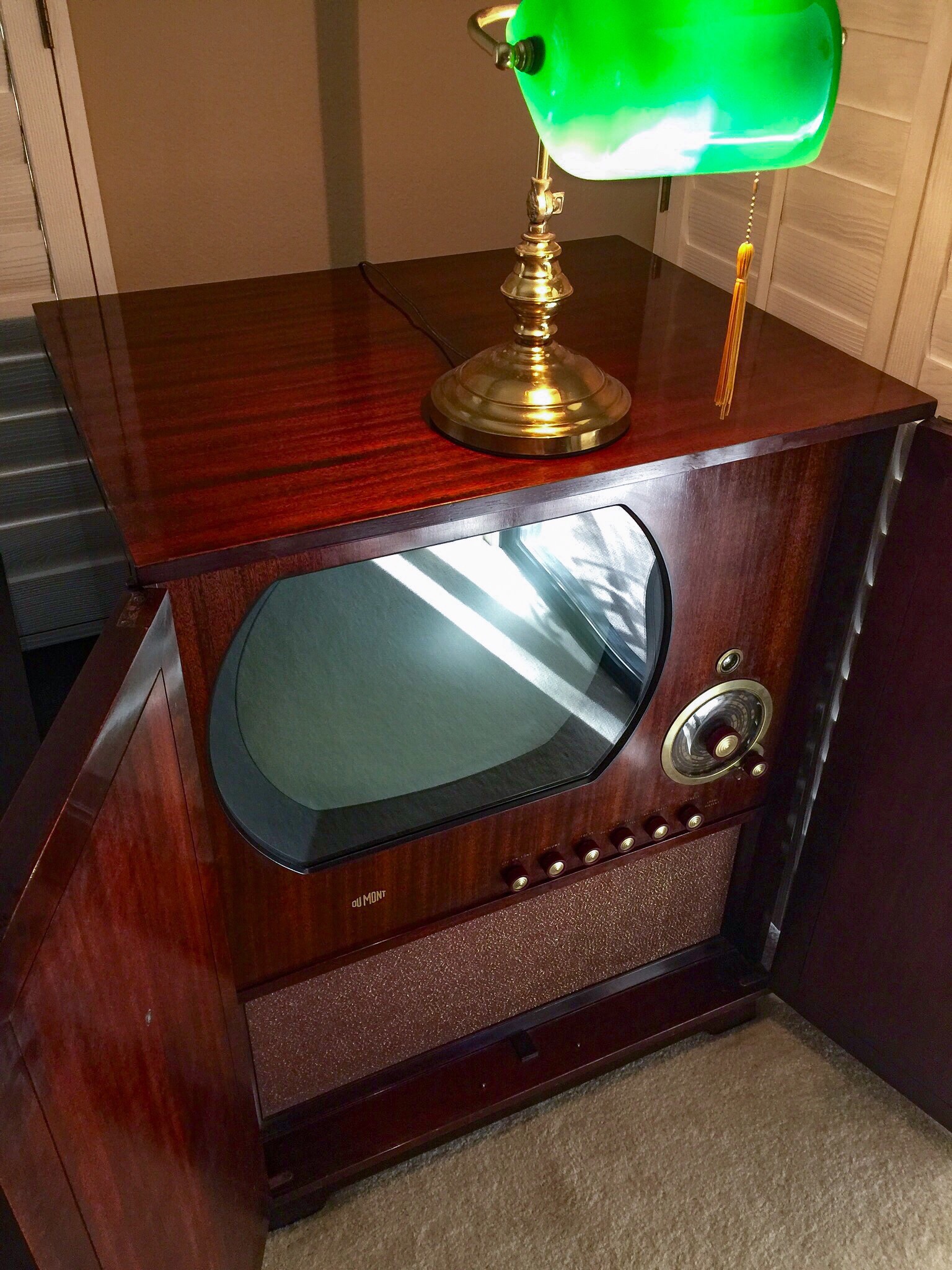 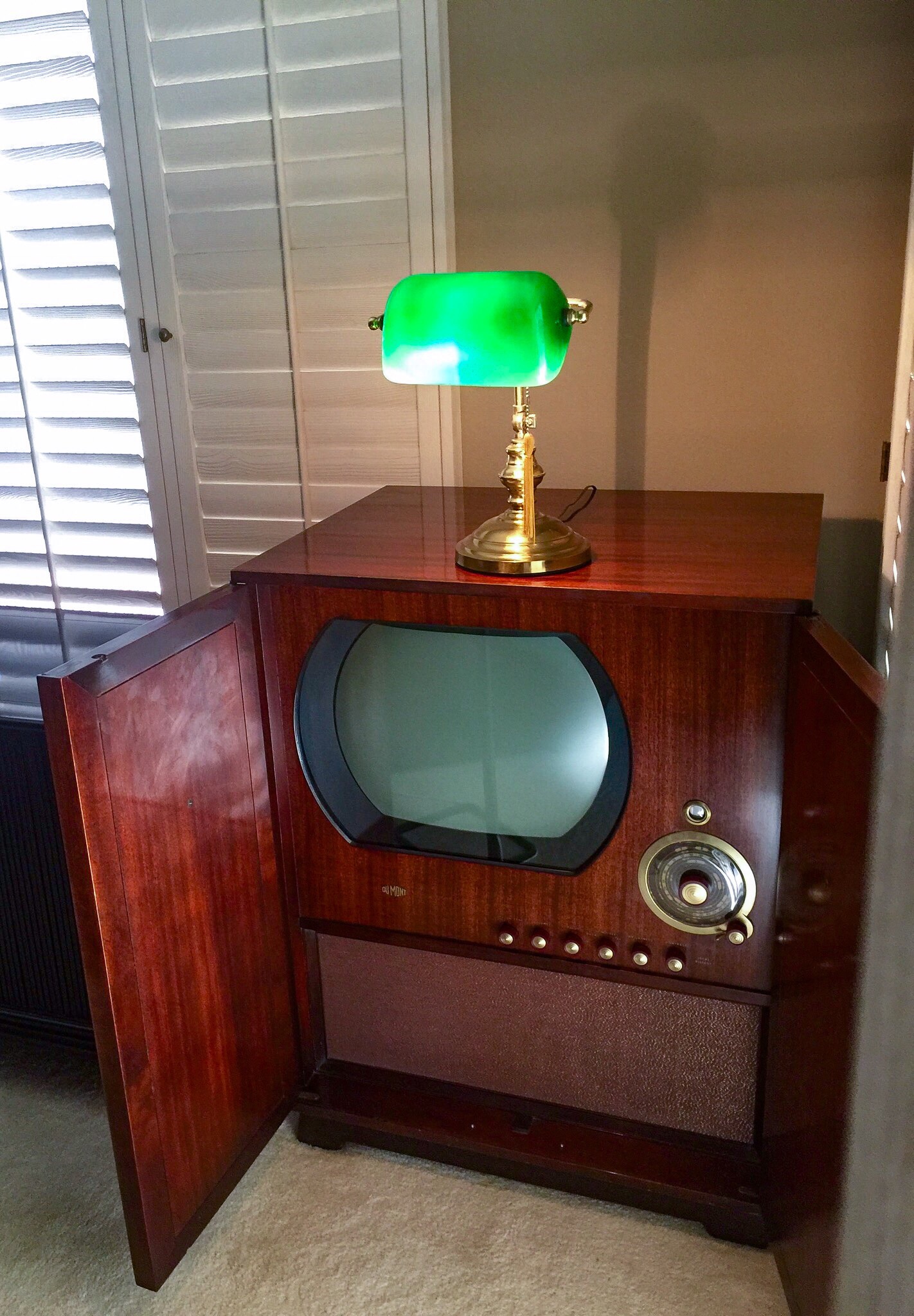 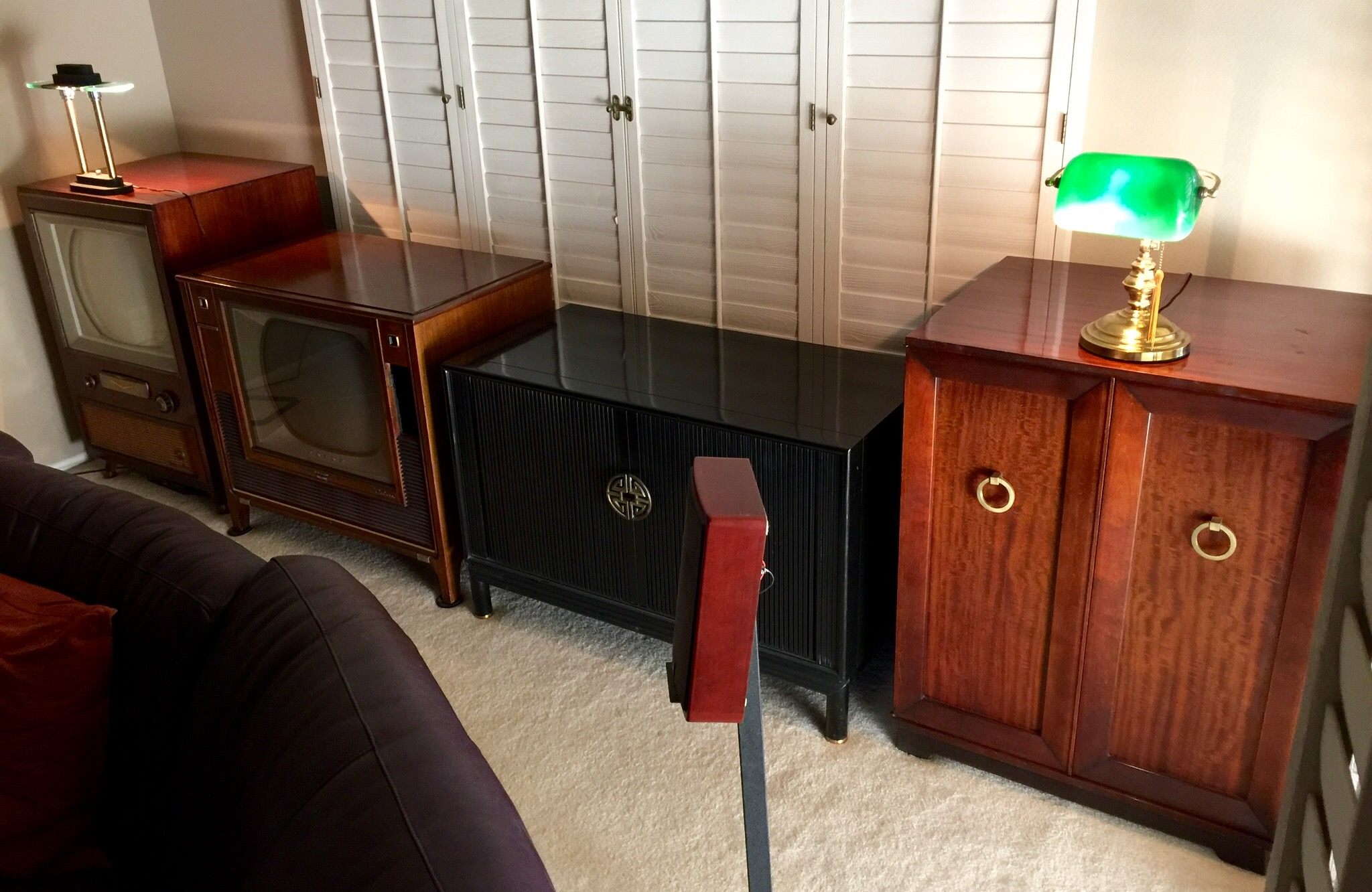 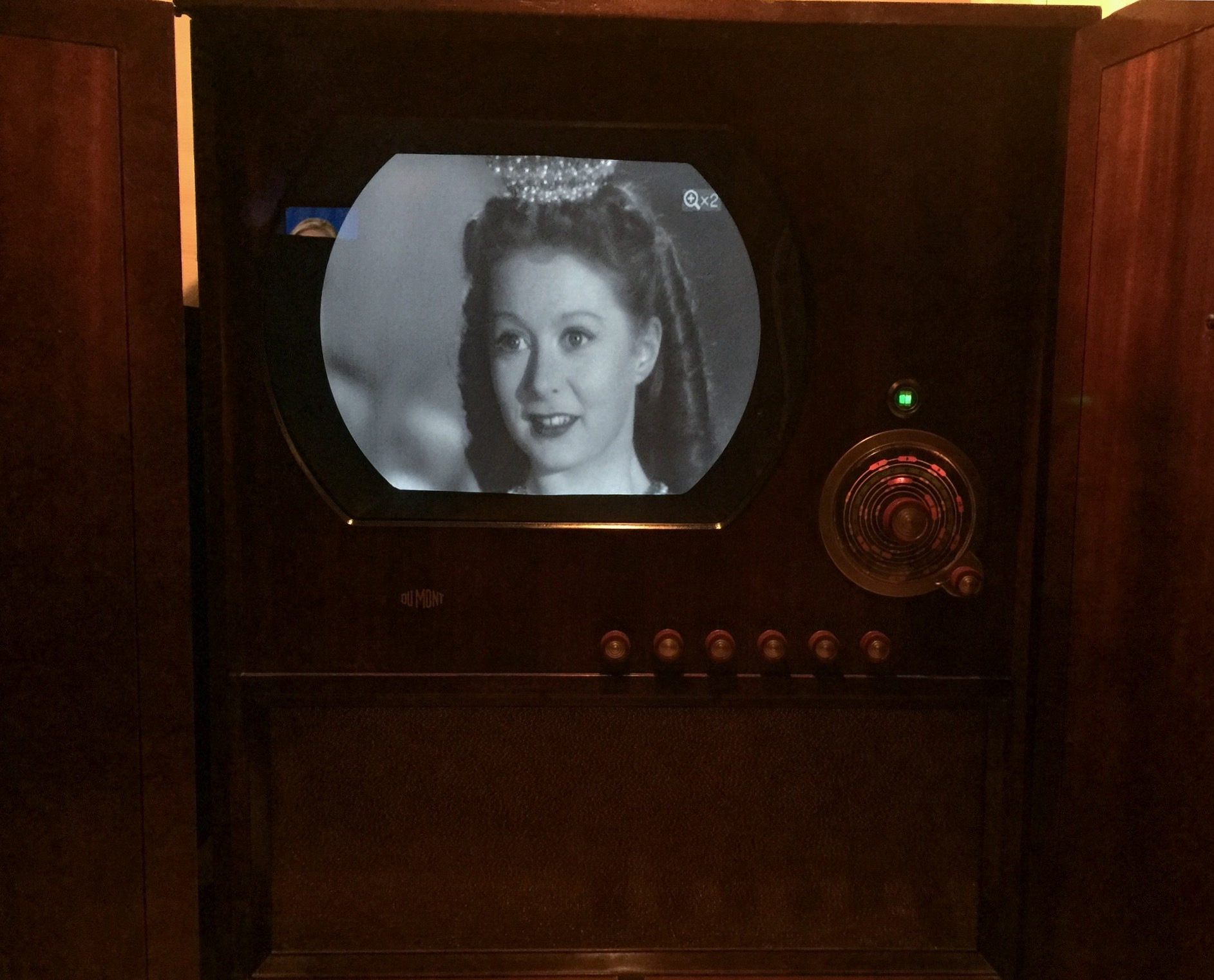 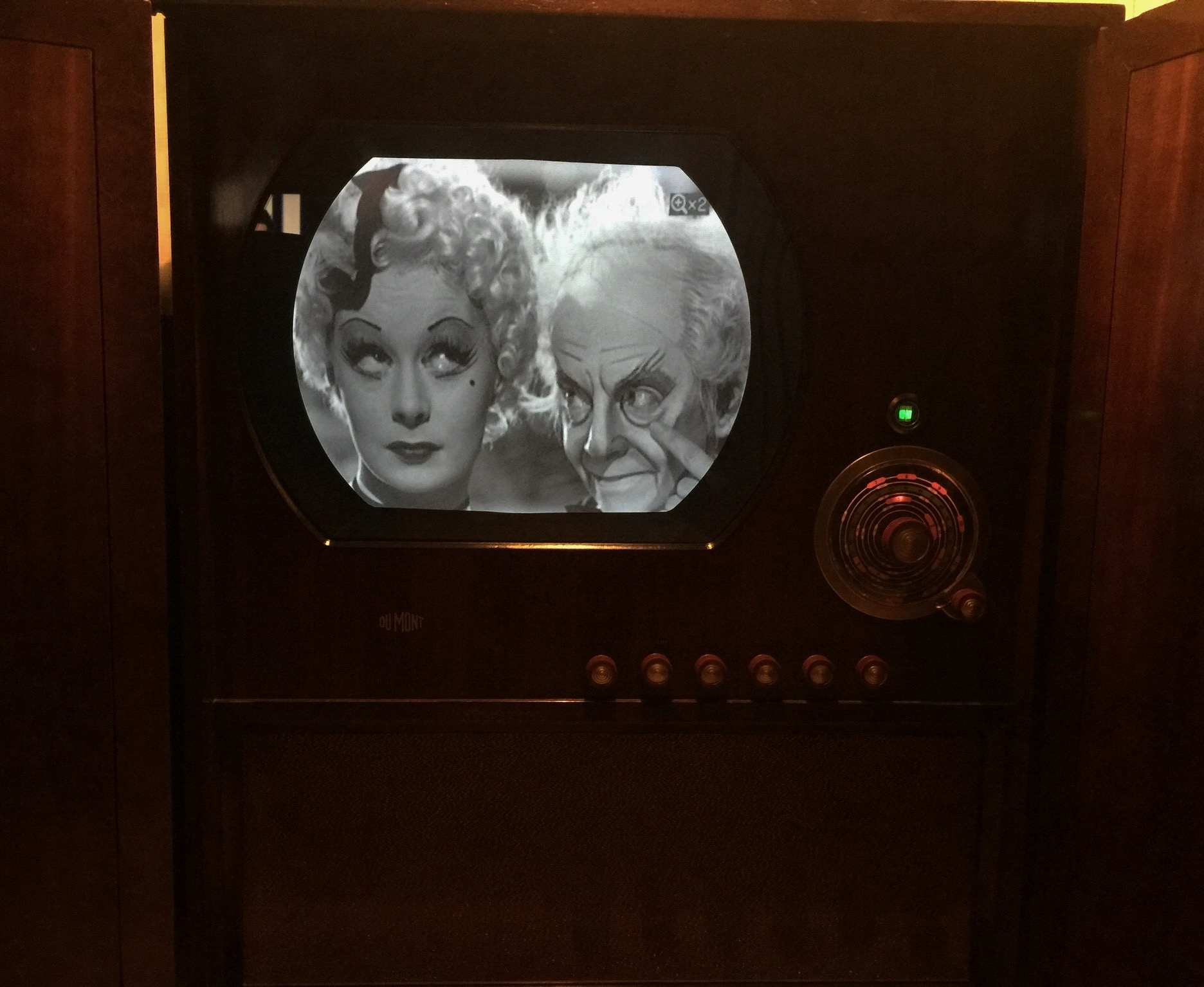 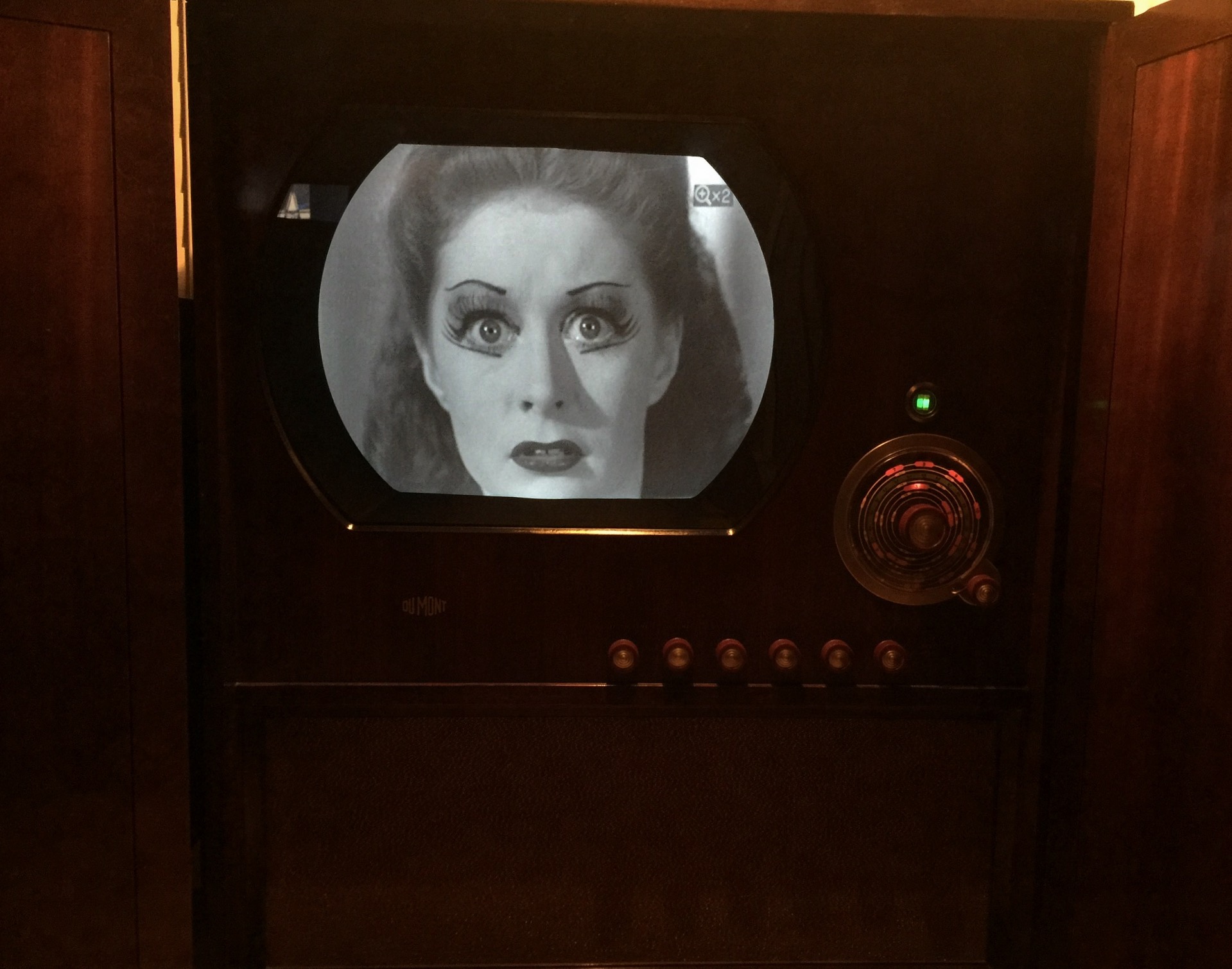 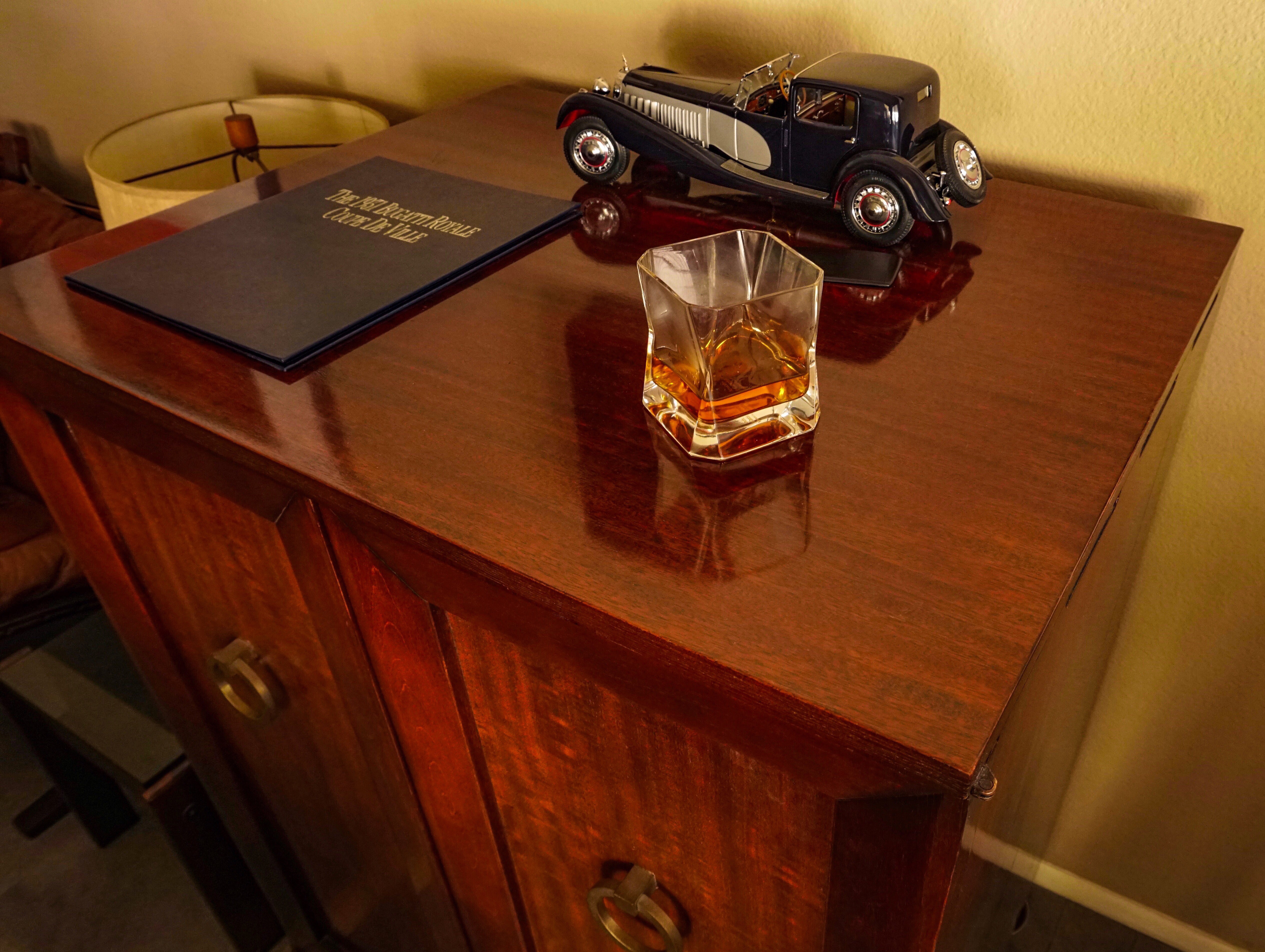 We contacted the previous owner. His comments:

Thanks so much for purchasing my set!! It is a beautiful set. The cabinet got all sorts of small nicks and scrapes during the trip to ETF that it did not have before that. They all seemed to be minor and hopefully a red mahogany stain stick will take care of most. Otherwise the finish on the cabinet is original. I did not touch it. Same with speaker cloth. Original. The 19AP4 CRT that was in it when I got it was stone dead. So I had to find a replacement. Both the set and good CRT were found separately in the Buffalo NY area by Tim Poliniak (Kamakiri on VK). He found the set on the last day of an estate sale. Set was listed for $50. But last day was half off, so Tim got it for $25. He did not realize at the time that it was the exact set I was looking for b/c of the picture of my Mom that you have seen. He passed the set onto me.

I then took to restoring the set. It had many issues during the restore beyond just recapping it. Bad controls (2-3 of them), bad vertical output transformer, bad CRT. For the longest time I could not get a signal. Turns out the inductuner (tuner) was busted and I had to track down a part inside that to fix it. One of the “wipers” was missing. The last issue, which I did not totally fix was an iffy horizontal frequency coil. It is the horizontally mounted metal can on top of the main chassis in the back, just to the right of where the antenna plugs in. Sometimes the horizontal will not lock in, even when adjusting the slug sticking off the back of it. I found that tapping the top of the can with a screwdriver handle sometimes fixes it. Very strange. I know the schematic (SAMS) can be found on the ETF webpage. Maybe you can look at that and see if you can replace that can with a replacement. Moyer Electronics in PA can sometimes track down parts like this if you give them the specs and parts numbers from the schematics. Only other issue was the CRT taking a bit of time to come up to full brightness. Most of the guys at ETF said that was probably the CRT taking its sweet time to warm up.

Other than that the set performed pretty well but I never put many hours on it. So the restore has really not been tested for long, reliable use.

I ended up deciding to sell it for a few reasons. First was b/c I got into restoring early color sets and I was after a RCA CTC-7 Pensbury, which Tim found for me and I got at ETF. I already have and restored a CTC-5. Attached picture.

Also the DuMont is a huge set and I only have so much room. Live in a small townhouse in MD outside Washington DC. So to bring in another big RCA color and also a Philco Predicta Tandem set, something had to go. I really enjoy working on the sets more than watching them after I restore them. So usually I fix em and then I want to move on. So that’s what I did with the DuMont. I currently have 10-11 sets I think. Pictured are a few. (See our Viewer’s Television page)

Ask me any other questions and feel free to use any of the above on your page. Love it!! 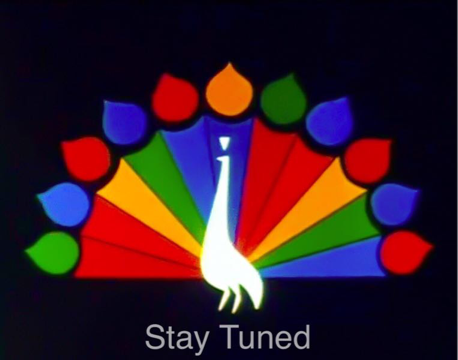